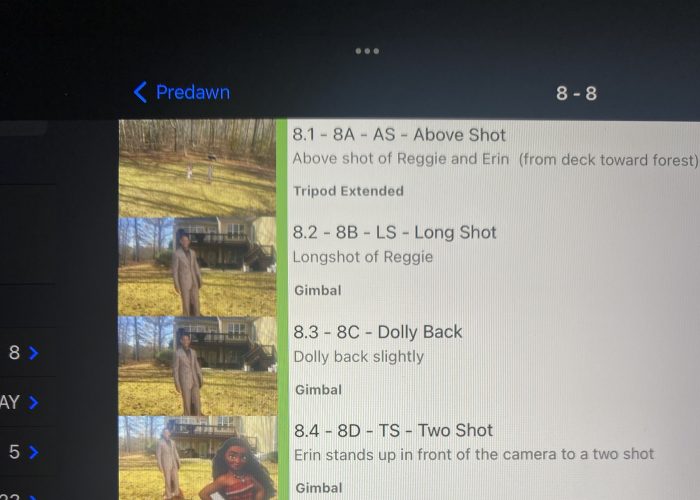 I’ve downloaded quite a few apps in my day. Many of them can be easily called wastes of time. Some were only as good as the trial limit but not worth paying $100 a month for. Imagine that: a monthly subscription to an app at $100. I’m not throwing anyone under the bus and naming names, but that’s just ridiculous. Good luck with that.

I started pre-production for the film a year prior, so that should already tell you I am examining every inch of this process with a fine toothcomb. Yep, even for a short film. You see, this is one of those moments where I need to hit the 3-pointer on the first go. The miraculous hat trick. The touchdown. You would think all of these sports metaphors occur with 100% luck. Truth is, they are delivered with a driven focus when you have everything working around you in harmony.

In my film production tool bag, Shot Lister became that helpful tool earlier in the game to help me get the winning edge I am looking for. I can’t praise this app enough and I’ll tell you why.

As I said, I started pre-production super early because one of the most important things to me in even the films I watch in the theater, streaming or Plex (Plex is my baby! Lifetime membership, son!) are camera angles. I don’t care how amateur your work is, or how experienced you may claim you are, poorly framed camera angles and boring cinematography can scuttle a film before it even starts. No matter the story. We came to ‘see‘ a movie. Sometimes some directors/cinematographers just ‘put’ the camera in the scene and hope for the best through the actors. It’s in my opinion it’s a collective experience with the weight more on the camera but that’s a whole ‘nother blog post. Plus, I better shut up and actually prove it with this finished film first. lol.

Since my emphasis was on setting up what I wanted in camera angles earlier on, the original method was to break down the script, consider what my shots were going to be, and storyboard (badly) to frame the scene/characters. Any one scene can have multiple camera setups for the close shots, over-the-shoulders, etc. I believe, in the past, I would just leave that info on the storyboards for me to refer to.

Then comes Shot Lister (which has been around a lot longer than I’ve been using it) which made my work portable and readable, with emphasis on portable as I use the app primarily on my iPad Pro. Check it out:

So here’s scene eight of the script (I use Final Draft): 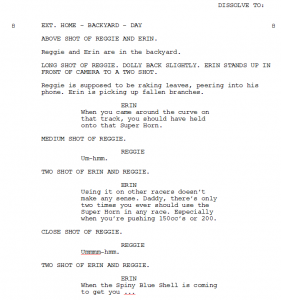 In a conversation like this, with the back and forth and Reggie not paying his daughter even the slightest amount of attention, has a number of shots from different angles. After entering all of the scenes and shots into Shot Lister (I don’t recall an option to upload my script. I know I spent time entering every individual scene. For people with feature-length projects, that might not be cool. For me and a 39-page script, the process gave me a grassroots, granular attention to detail process), I would get the following: 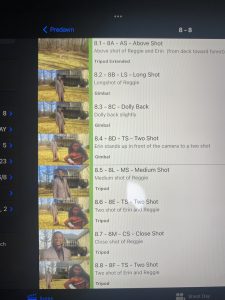 You might be asking, “What are Will Smith and Moana doing in the shots?“. Funny you should ask. I hired them both on my $20 billion dollar budget using James Cameron-style tech to bring Moana to life!

Truth is, when you get to a certain age, the friends you used to have that would just come over, hang out and act as stand-ins for your madcap film schemes come to an end. Everyone works. They have children. Other responsibilities. If I want to get out in the middle of the afternoon and see how a shot looks, I grab Will (from Amazon), put him out in the back, and line up my camera angles.

Plus, it saves me the dread of trying to storyboard with crappy artwork skills. I don’t recommend using cardboard props for EVERY shot. I mean, try doing a side view and you’ll see for yourself. Plus windy days…

Anyway, Shot Lister helps me with numbering each shot and, for every shot, all the elements I need to know from the breakdown: any effects, props, camera and lighting setup, lens, etc, etc. All this is in the palm of my hand so I can refer to it instead of a notebook of pages all over the place.

Then it gets better: Shot Lister breaks all of this down into the days you plan to shoot. You can calculate how long the shot will be when the day begins and ends, and how many pages (calculated from page length) are to be shot that day.

I want to say right off the top: a lot of this is a manual process. I do not want you to come through thinking it grabs your script, press of a button, walla, a finished shot list. Nope. Nadda. You shouldn’t want the software to do that anyway.

Shot Lister helps you become one with your script and your project. Starting with scene one shot one, you are entering everything step by step in such a manner that you get to know your story better than you probably know yourself. That’s important — at least for me — as I want to address every inch of the script and how it needs to look for the audience.

Now that I’m getting lens advice from ChatGPT, I can even enter the make/model of the lens I’ll be renting into Shot Lister to fill out what I’ll be using per shot.

I use Shot Lister in conjunction with Gorilla Scheduling, which I had first and, truth be told, does everything Shot Lister does with a bunch of other additives (like stripboards). Gorilla Scheduling isn’t on my iPad so that gave massive points to Shot Lister without question plus the interface is much smoother on Shot Lister. It’s really not a question of ‘use this or use that’. I use them both for different amounts of work. I still need to create call sheets and Gorilla Budgeting helps me manage the bills. When I compare them both to the scheduling aspect, they are in perfect harmony so What I have entered in Shot Lister is mirrored with what’s going on in Gorilla Scheduling when I’m on my PC.

I recommend Shot Lister as a filmmaker’s first choice in apps. They have a nifty monthly subscription for the full app per month which makes sense cause it’s worth it.

Any cons? Nothing I can’t be considered picky about. I have a short list of things I wish were better but here’s the thing: you get the app free in the first place. If you want the pro version, it’s a small price per month. It does everything I need to feel good about the direction I’m shooting this film in. Who am I to bitch about the small stuff? Later, I’ll address the art of gratitude that is propelling this short film project.

In regards to Shot Lister, I am grateful and appreciative that this tool is available. You will be too. 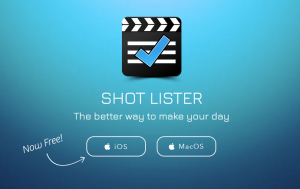 Since 2020, I have to say with complete honesty, I have not had a bad year. Looking back, it was continuous: 'plan this. execute that. accomplish the plan' on other non-film-related, life projects. I

It's Saturday, January 14th, 2023. Audition day part one!  Virtually over at backstage.com. Truthfully, very nervous and I really hope I can complement the professionalism, hard work, and talents

I have a secret skill that is being tasked at the moment: I can pick film-worthy/talented people. I can easily run off a short list of folks I cast for little, now non-existent projects I worked on